One common solution that's used to address fatigue and reflective cracking in pavements is applying an asphalt overlay directly on top of the existing pavement. Although this approach provides some additional service life, the benefit is often short-lived. For each inch of applied overlay, reflective cracks are assumed to be deterred from reaching the surface for a period of just one year, creating a situation for cracks to pre-maturely resurface. This also creates an expensive, losing battle with pavement maintenance that will never end.

However, pavement interlayers like the GlasGrid System have proven to be an extremely effective method for deterring cracks for an extensive amount of time. Installed between an asphalt leveling course and the surface course, the GlasGrid System becomes the hidden strength in a road, turning reflective vertical crack stresses horizontally to effectively dissipate them.

Take a look at this example below. On the left, the asphalt is rehabbed with only an overlay and has no defense against the cracks creeping up towards the surface over time. As significant reflective cracking begins to appear at the surface, the rate that water seeps into the pavement increases. On the right, the pavement is reinforced with the GlasGrid System which intercepts and redirects the cracks to prevent them from migrating further.

Cost Benefits of the GlasGrid System 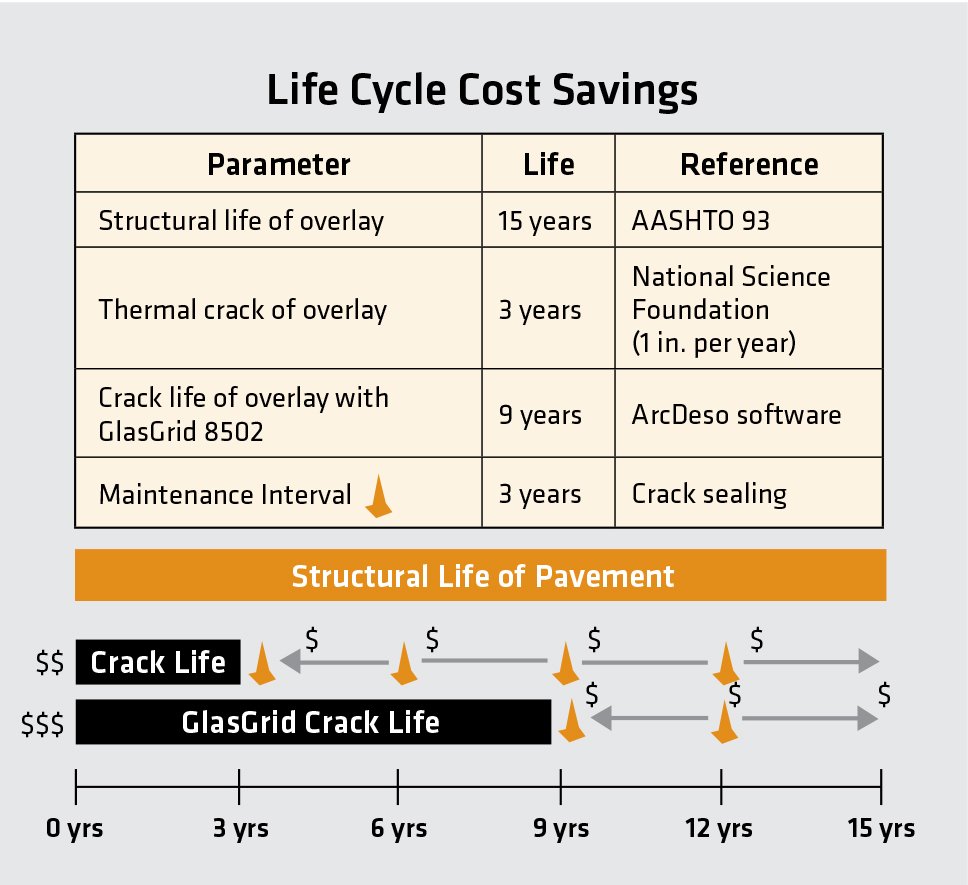 To determine the potential long-term cost benefits of the GlasGrid® System, it is first necessary to predict the performance of a particular overlay. See the table on the right for reference.  In the chart below, the continuing deterioration of a pavement surface is indicated by a corresponding reduction in the Pavement Condition Index (PCI). In this example, a 4 in. thick overlay for a high volume road has been designed to last 10 years. If there were no cracks reflecting upward from the underlying pavement surface, the deterioration of the new pavement would likely continue along the solid line shown.

However, the existing pavement surface exhibits cracking that will reflect to the surface. Therefore, although the 4 in. thick asphalt overlay is sufficient to last for 10 years from an overall structural perspective, nearly all of the existing cracks will have propagated through the new asphalt after approximately four years; this is based on the general rule that cracking propagates through an asphalt layer at a rate of 1 in. per year. As significant reflective cracking begins to appear at the surface, the rate that water seeps into the pavement increases. The pavement surface is predicted to deteriorate as indicated by Line A in Figure 5. In this example, the pavement would require a major rehabilitation after only five years as opposed to the scheduled 10 years.