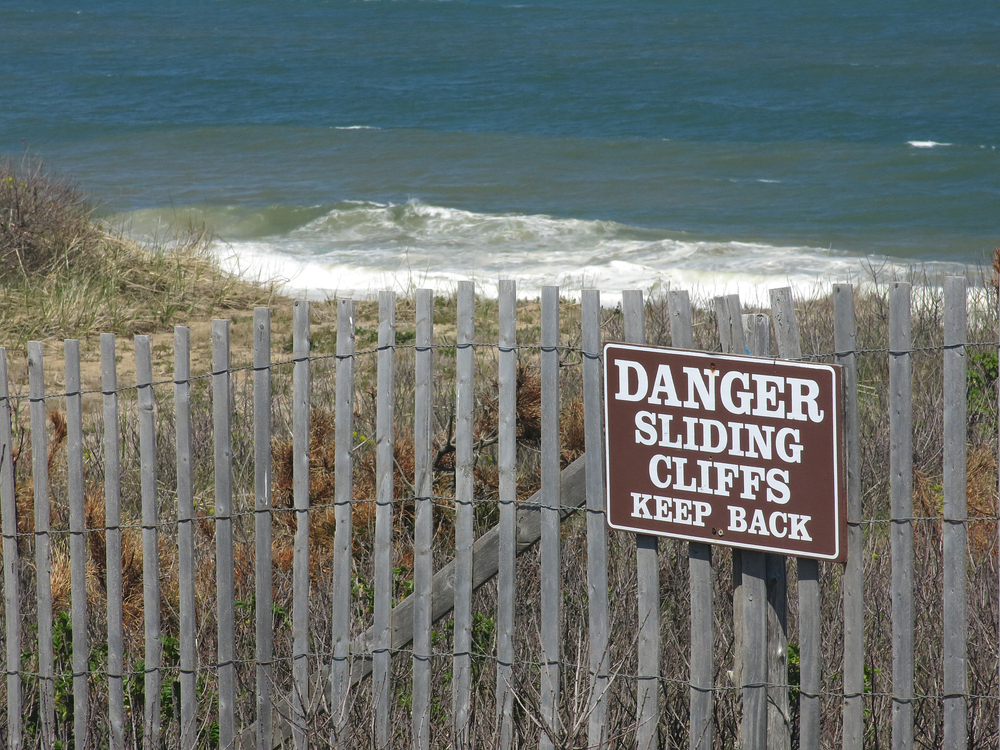 When it comes to the myriad of problems resulting from climate change, it’s hard to overstate the gravity of the problems facing coastal communities around the world. Coastal erosion costs roughly $500 million per year for property loss in the U.S. Scientists are confident sea levels will continue to rise through the end of this century and beyond. Where structures subject to scour are involved, the risk is especially grave as disasters such as bridge collapses can ensue. Now, savvy coastal stewards are embracing enhanced erosion protection - living breakwaters created from marine mattresses which provide a friendly environment for oyster habitation while mitigating the impact of rising waters and increasingly harsh waves.

The Problem with Hardening Living Shorelines

In the past, the proposed solutions to these problems focused on building higher, thicker, and wider protective structures like seawalls, groins, rip-rap, dikes, dams, and revetments, also known as gray infrastructure. The operative idea has been to “harden” coastlines against the ravages of Mother Nature. It has become apparent that this approach does not work. In fact, these rigid structures often cause worse damage because they can interfere with natural water currents and prevent sand from naturally shifting along coastlines. They may protect the local area where they’re built but may increase the damage and erosion in adjacent beaches and dunes by re-directing huge flows of water and debris their way.

But Mother Nature herself has evolved several strategies to tame the ferocity of storm winds and water and increase shoreline resilience. And today’s most forward-thinking scientists and engineers are attempting to follow her lead in devising their solutions to climate-change-related problems. The strategy is called “softening” or green infrastructure. Whereas “hardening” coastline communities meant building structures against nature, softening builds with it by replicating the functions of natural storm mitigation factors, like “oysters, tide pools, grasses, lots of colorful marine life,... [which] were a big part of New York’s coastal-protection system’’ said Karen Orff in The New Yorker Magazine. Orff is a landscape architect, MacArthur genius, and designer of the Living Breakwaters Project currently being built in the waters off the coast of the hurricane-prone borough of Staten Island, NY, in lower New York Harbor. “They acted like breakwaters, absorbing wave energy and slowing the water before it hit the shore. We’ve spent the past one hundred years dredging out everything for shipping and hardening the edges.”

Staten Island sits at the center of the New York Bight, a sharp bend in the shoreline between New Jersey and Long Island, which funnels water directly onto its shore. Because of this, the borough is one of the East Coast’s most vulnerable areas to erosion, flooding, and other hurricane damage. In 2012, Hurricane Sandy, one of the most destructive storms ever to hit the United States, swept through Staten Island, claiming 24 lives and causing nearly $20 billion in damage. The storm ripped down power lines, utility poles, and trees. It caused major flooding in a number of low-lying shoreline communities across the borough.

In 2013 the Dept. of Housing and Urban Development sponsored a competition for designs to help communities increase resilience against the worst effects of future hurricanes. Orff entered and won the competition with her design for the Living Breakwaters. Today, her firm, SCAPE Landscape Architecture is the lead contractor on the $107 million project, which broke ground on September 21, 2021. SCAPE is partnering with marine contractors COWI and Weeks Marine, Inc. for the construction phase, which is scheduled to be completed in 2024. Orff developed an ingenious system of Living Breakwaters consisting of discrete elements which work together to both reduce storm damage and enhance plant and marine habitat in the Raritan Bay off the coast of Staten Island. Approximately 2,400 linear feet of near-shore "breakwaters," or partially submerged rubble mound structures, will be built between 790 and 1,800 feet from shore, on a base constructed of approximately 1,100 12-inch Triton® Marine Mattresses, covering approximately 120,000 square feet of seabed.

Like the naturally occurring marine breakwaters Orff referred to, these Living Breakwaters are designed to reduce erosion and storm damage by slowing down waves and dissipating their energy. Although it won’t be clear for years whether this strategy is a success, computer modeling of the site during the development phase of the project showed that had breakwaters existed in the area when Hurricane Sandy hit, wave heights would have been reduced by four feet. “The uniformity, strength, ease of installation, stability, and porosity of the Tensar Triton Marine Mattress System tends to absorb wave energy and reduce wave run-up,” said Steve Williams, Industry Manager, Marine & Port, at Tensar Corp. “The structure of the mattress system makes it ideal for use on soft, non-compacted subgrade material like the seabed in the bay around Staten Island.”

In addition to dampening wave energy, the breakwater segments will--just like their nature-made counterparts--serve as habitat for oysters, lobsters, and juvenile fish. Each breakwater consists of a stone core, a base layer made of Triton Marine Mattresses to protect against scour, and outer layers of armor stones and ecologically enhanced concrete armor units. The Mattresses are composed of strong, flexible Tensar Geogrid filled with limestone. Tensar worked very closely with subcontractors COWI and WSP in the initial design to develop a unique fabrication for the Mattresses in order to meet the challenging geotechnical issues of the site, like irregular land contours, variable subgrades, continuous scour, and generally harsh conditions.

Another important goal of the Living Breakwaters project is an ambitious restoration of the 220,000 acres of oyster reef that once encircled New York Harbor. For this, it is partnering with the Billion Oyster Project, a citizen science initiative that is working to grow a billion oysters in the bay by 2035. Massive oyster reef systems were once a natural defense against storm damage—softening the blow of large waves, reducing flooding, and preventing erosion. And since one adult oyster can filter up to 50 gallons of water a day, they helped keep the water clean. And for hundreds of years, the reef provided both sustenance and livelihood for the Lenape tribe who lived on the island, as well as the European settlers who replaced them.

Tensar’s Triton Marine Mattresses are critical to the success of the oyster restoration, as their limestone filling will provide the substrate for growing the oysters. Oyster sprat, or larvae, incubated in repurposed and disinfected oyster shells from New York restaurants, will then be transported to the Mattresses, where they will attach and grow to maturity.

The Triton Mattresses have already proved to be successful as oyster incubators. From 2008 to 2015, Dr. Earl Melancon, professor emeritus at Nicholls University, conducted a study of three shore protection methods in Terrebonne County, Louisiana, an area suffering from severe erosion and habitat loss. He and his team compared the Triton® Marine Mattresses against a permeable matrix of interlocking concrete armor units and an artificial reef design made from steel and recycled oyster shells. Of the three methods tested, “The sloping Marine Mattresses gave an opportunity for oysters to colonize more readily, and that allowed for the creation of more reef structure,” Melancon said in an interview with Tensar.

A History of Shoreline Protection

If the Staten Island Living Breakwaters project helmed by a MacArthur genius is at the moment the most high-profile green infrastructure project, it is by no means the first. The Tensar Mattresses have been in use for shore protection and scour control projects around the country since at least 1993. The first installation occurred at Boston’s Logan Airport in 1993 when the airport was rebuilding a runway and chose the mattresses because it allowed them to preserve an adjacent salt marsh and habitat. Other early installations occurred in 1994 at Cape May, NJ and Belmar, NJ, where the communities used the Mattresses to create artificial reefs for scour control. 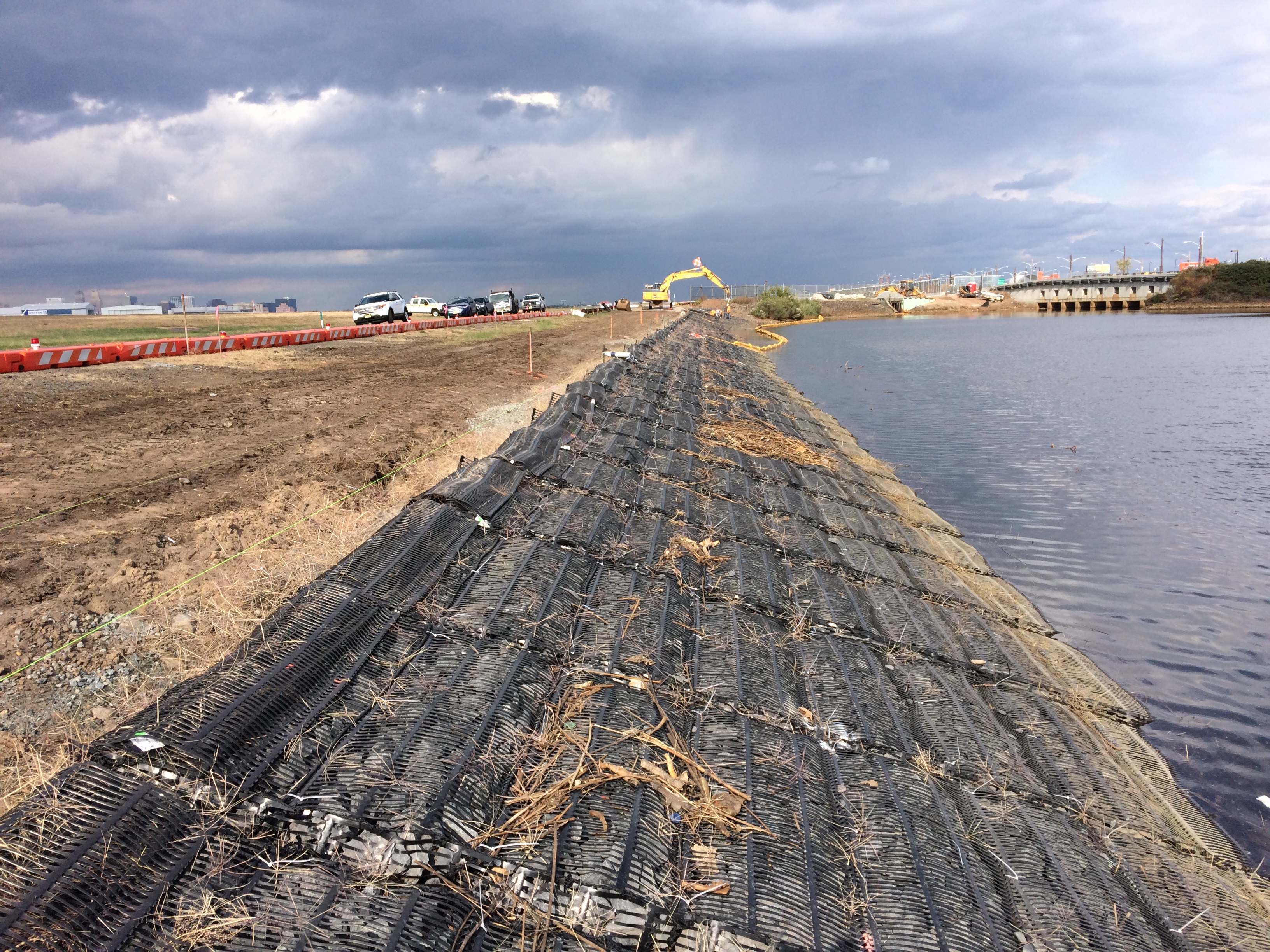 In 2014, at Newark Liberty International Airport in New Jersey, a tidal ditch embankment was failing and needed restoration and scour control. The design team considered other solutions before they chose the 12-inch Triton Marine Mattresses for their proven performance in high-velocity water flow, quick and easy installation, adaptability, and nonmetallic, non-corrosive, and weather-resistant properties. In Brooklyn, NY, at Brooklyn Bridge Park, Triton Marine Mattresses were stacked in multiple layers at the top of the steel sheet pile bulkhead to protect against toe scour.

NASA’s Wallops Island Flight Facility, on the Eastern Shore of VA, has experienced rising waters, stronger storms, and shoreline erosion of as much as 12 feet a year. NASA has $1 billion worth of assets at risk on the island. To reduce that risk, NASA is currently hauling 1.3 million cubic yards of sand and building six offshore segmented breakwaters. The armorstone breakwaters were placed atop 6-inch thick Triton Marine Mattresses to provide toe scour protection and foundation improvement. 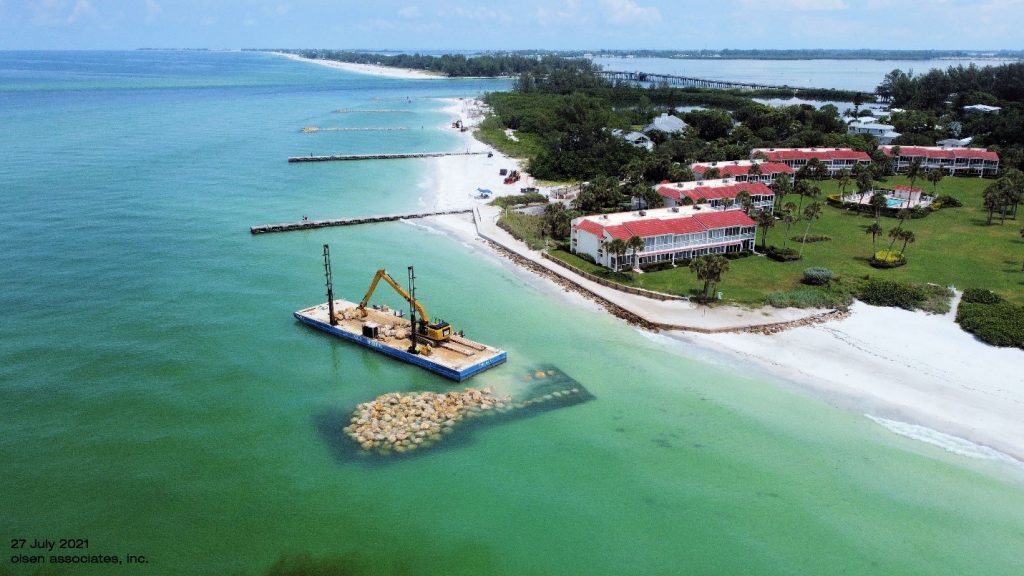 The north end of Longboat Key in Manatee County, FL has long suffered from erosion due to repeated storms and the presence of Longboat Pass. Maintaining the beach is a high priority, not only because of tourism but because “it's the only thing that keeps the Gulf of Mexico from coming right across Gulf of Mexico Drive,” according to the Longboat Key Mayor B.J. Bishop. The proposed solution designed by Olsen Associates is beach nourishment and the construction of five sand-saving groins to be built atop 6-inch Triton Marine Mattresses as foundation improvement and toe scour control.

Tensar marine solutions can help with a wide variety of projects from erosion control and scour protection to innovative living shorelines and underwater foundations. Visit our website for a resilient solution that will protect shorelines for decades to come.