Plasticity is a property of the fine-grained portion of soil that allows it to be deformed beyond the point of recovery without cracking or changing volume. Some minerals, such as quartz powder, cannot become plastic regardless of how fine the particles are or how much water is added. On the other hand, clays are soft-textured soils containing minerals that undergo considerable volumetric changes during moisture fluctuations. All clays are plastic and can be rolled into thin threads – which resemble cigars – at a certain moisture content without crumbling. Since virtually all fine-grained soils contain some clay, most of them are thus deemed plastic.

The Costly Problem with Fat Clays 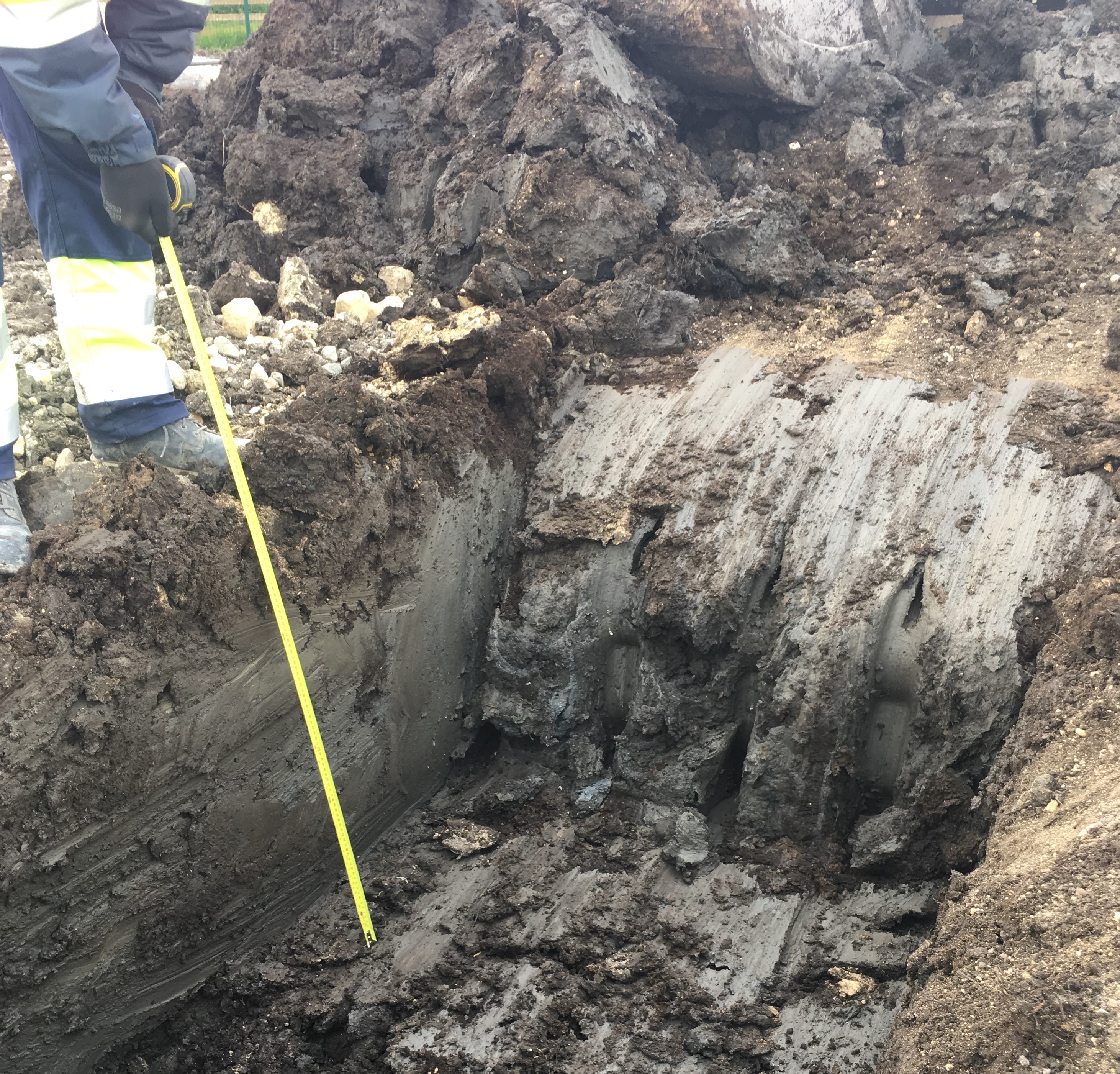 In layman’s terms, highly plastic clays, or "fat" clays are known as “shrink-swell soils.” The higher a clay’s plasticity index (PI), the greater the potential for swelling or expanding when wet and cracking or shrinking when dry. Changes in volume result in shear stresses that in turn cause significant lateral and vertical pressures which slowly lead to cracking and differential settlement of roadways, well pads and structures built over such soils. Mitigating fat clays with traditional solutions like over-excavation and removal of the undesirable clays, and replacing them with high-quality aggregate fill is time-consuming and expensive, especially if the suitable aggregate is not readily available. In addition, the depth of the fat clay will require the equivalent volume of replacement aggregate or other PI-mitigating material. Of course, the root problem is that moisture will continue to infiltrate the area over time.

Louisiana is an area prone to fat clays with tremendous swings in weather ranging from floods to droughts. The Department of Energy’s Strategic Petroleum Reserve sits on about 400 acres of land twelve miles southwest of Baton Rouge. Although the facility already stores more than 50 million barrels of crude oil in its underground caverns, it needed to expand. The engineering team knew it had to mitigate the shrink-swell potential that would be caused by the moisture fluctuations, as it was imperative that the drilling rigs have virtually no differential movement while mobilized and operating on the pads. 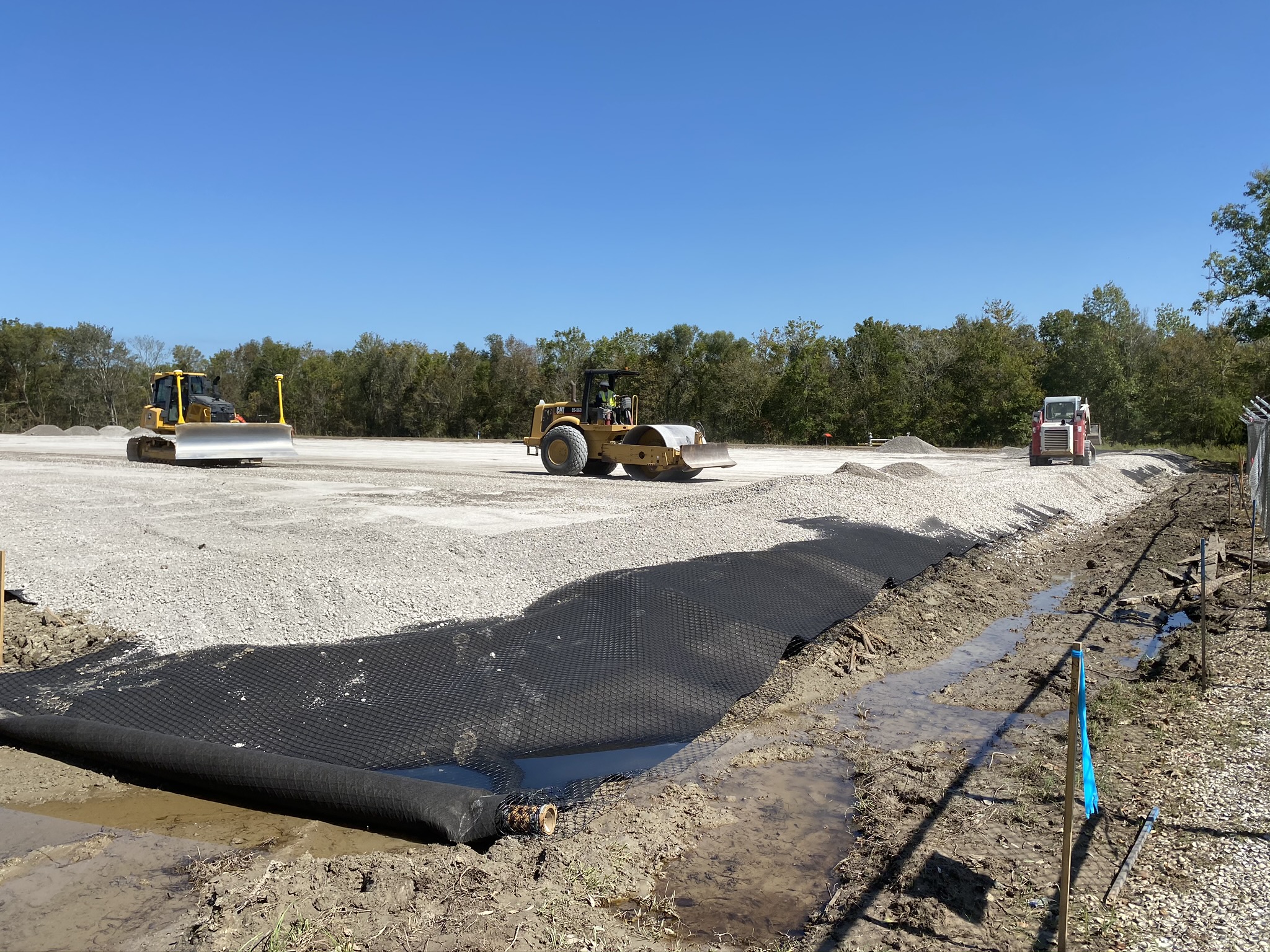 The overall objective was to create a strong working surface and mitigate the moisture felt by the fat clay. Tensar's engineers worked with the owner's engineering team to offer a more time and cost-effective solution using a combination of TriAx geogrid and Filtergrid. That solution began with the removal of approximately six inches of existing natural ground and then a layer of TX160 geogrid was placed directly on the fat clay.  Next, 12” of uncompacted sand was installed to serve as a way to drain as much moisture as possible horizontally instead of vertically. On top of the sand layer, a minimum of 8 inches of lean clay was placed. This cap of lean clay provided a moisture barrier to isolate the underlying “fat clays” from the volatility of changes due to variations in moisture. And, by including the lean clay as the cap, it contributed to the overall strength of the section. 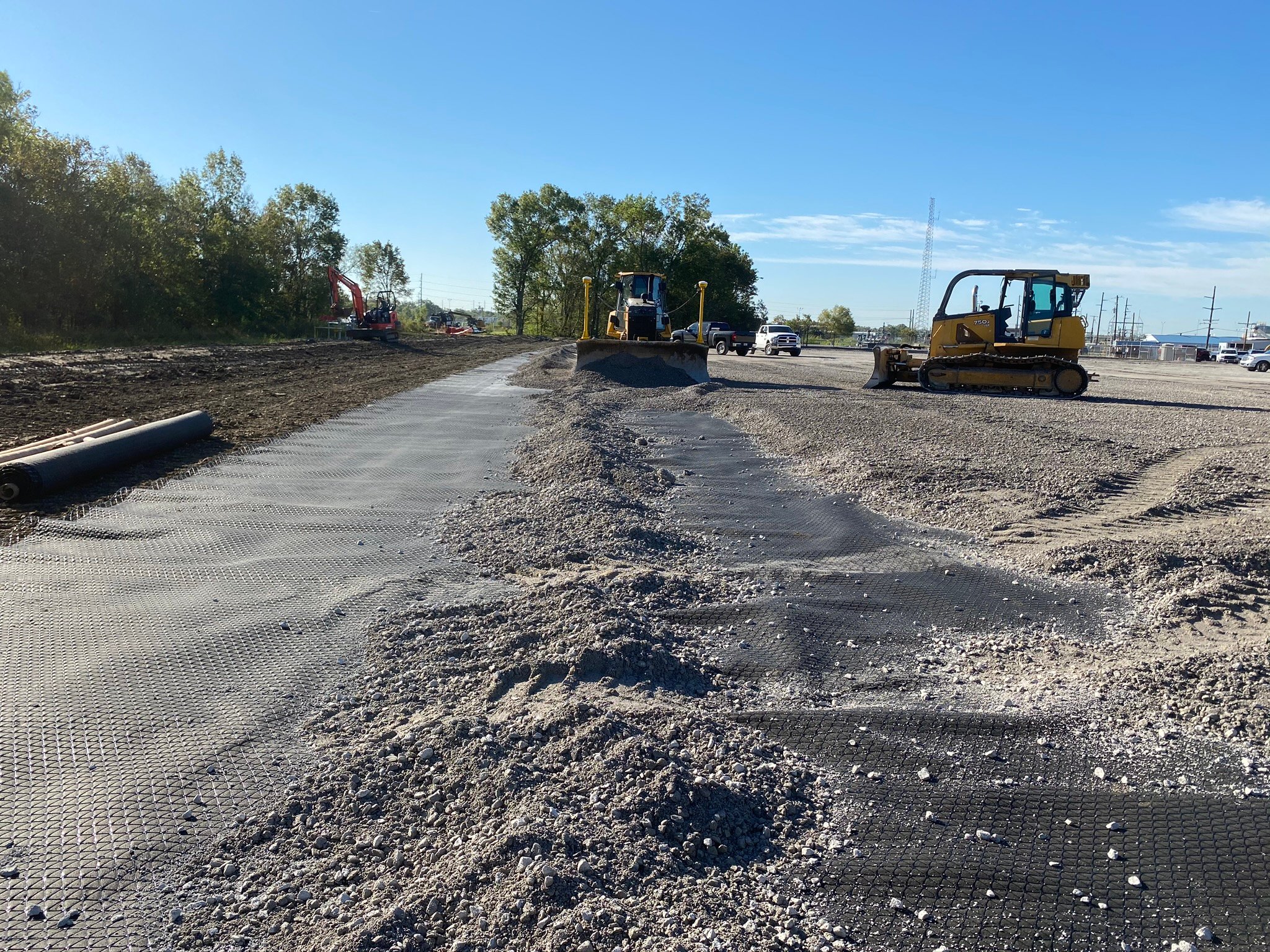 After completion of the clay cap, the contractor installed a layer of FilterGrid 60 and placed a 12” lift of aggregate to serve as the wearing course and thus the finished surface for the well pad. By using FilterGrid 60, the clay cap was unable to intermix with the aggregate thereby preserving the integrity and strength of the section. The owner wanted to maintain the aggregate surface, without contamination from the drilling rigs and associated equipment and traffic. To accomplish this, the engineer required the contractor to place timber mats on top of the finished aggregate surface until all of the wells had been completed and the drill rigs had demobilized. 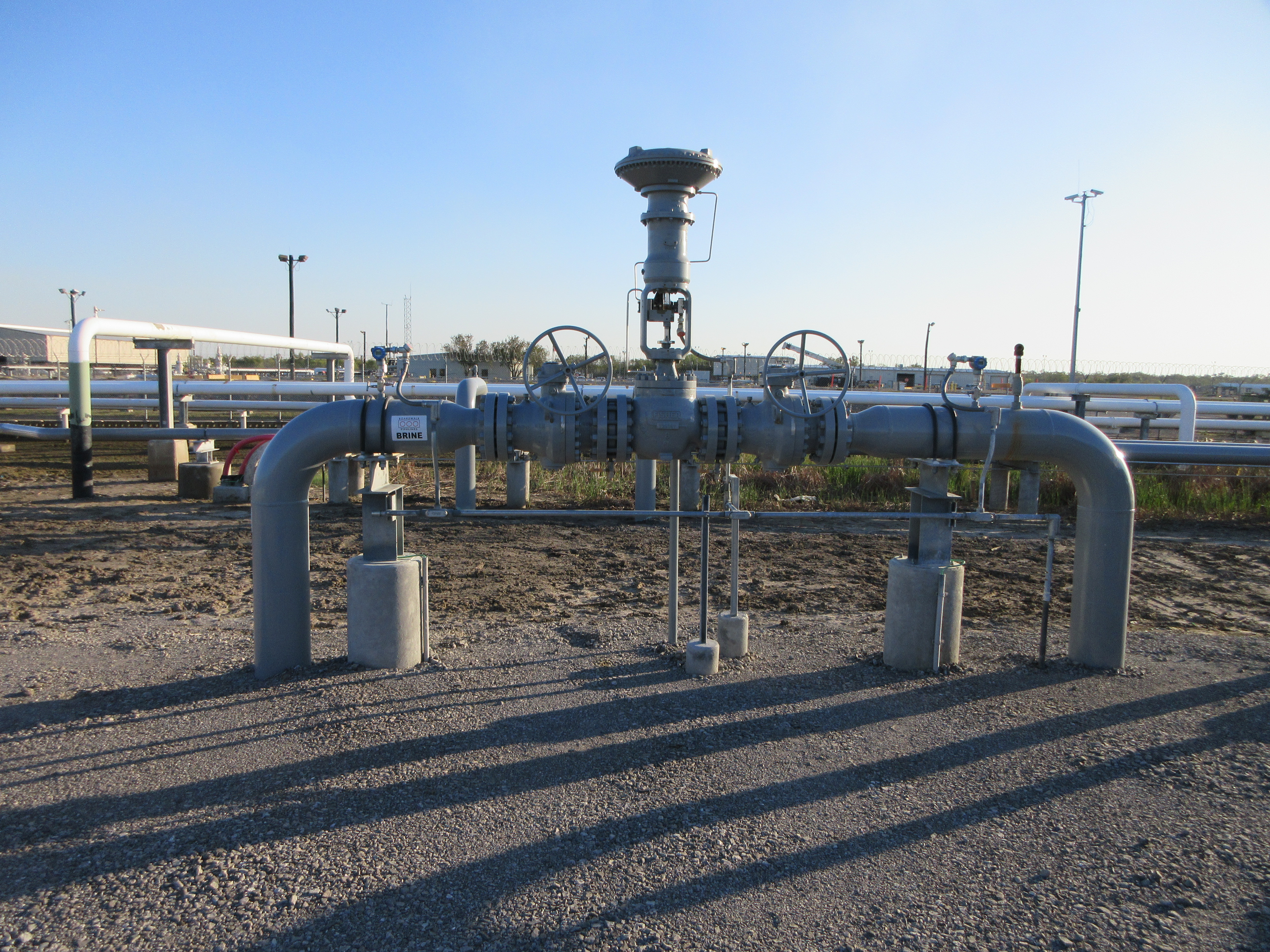 Ultimately, the engineer was able to provide the owner with a time and cost-effective solution that was easy to construct and enabled the on-schedule completion of the wells. The engineer summarized the completed well pad in these words, “We wanted to get the fat clays predictable, and the combination of Triax geogrid, sand, lean clay and FilterGrid allowed us to do so.” 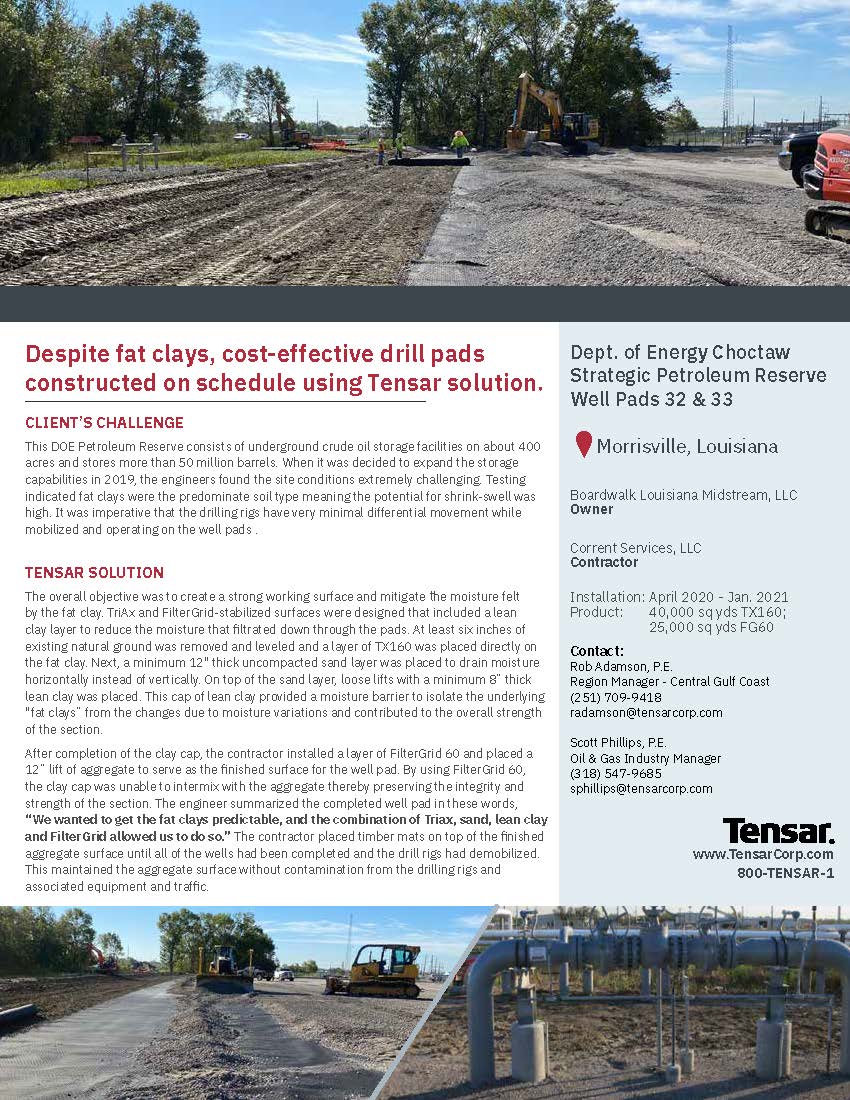 Learn more about Tensar's solutions for the oil, gas and petrochemical industries.

Solutions for Oil, Gas, and Petrochem